This is NOT me..it's someone else, but it's the mask I was fitted for today. It's plastic, heated to soften then put over your face tight to mold and cool. I can't open my eyes or move my lips while it is on. I am NOT claustrophobic , thank you Lord. 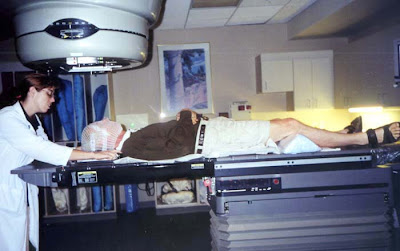 ******
Our trip to the doctor's was not fun. I have developed 8 more tumors in my brain. Doctor says it's time to try "whole brain radiation."
"(Whole Brain Radiation Therapy
Whole brain radiation therapy (WBRT) is used for treatment of multiple metastases. It is the most frequently used therapy for breast cancer brain metastases. WBRT has been shown in research studies to extend life and improve quality of life.
Seventy-five to eighty five percent of patients will experience some improvement or stabilization of their symptoms, especially headache and seizure. Motor loss (problems with walking, coordination, balance, etc.) is less successfully treated. Thirty to forty percent will achieve a complete reversal of all symptoms. Whole brain radiation can also be used after surgery or radiosurgery to help prevent new metastases from developing in other areas of the brain. Sometimes, chemotherapy will be held during treatment because some drugs given at the same time as radiation can increase the side effects of radiation
The possible immediate side effects of whole brain radiation are fatigue, temporary alopecia (baldness), dermatitis (skin rash), and otitis externa (inflammation of the outer ear), and hearing loss due to fluid and/or wax build up in the ears.
Long-term side effects begin to occur in six months to two years. They include deficits in cognition (understanding) and memory losses, urinary and bowel incontinence (difficulties with controlling bladder or bowel) and cerebellar dysfunction (lack of coordination). Radiation doses given over a longer period of time lessen side effects. Some doctors will give a lower dose of radiation to women whose cancer outside the brain is well controlled to lessen long-range toxicity.) "

I will be doing 4-5 weeks of 5 days a week radiation. I will probably have short term memory loss. I currently have some loss of peripheral vision which may come back as it is not eye damage but pressure on the brain.

Click here for some of the side effects of Whole Brain Therapy..
do I REALLY want this?? I don't want to, but I will for my family.
Alas..I did cry..I wonder, will they( the brain tumors) keep coming back??
Please pray for good results..for my friends who have cancer , for my family, for my mother who has been very ill in Florida, since my dad passed away the first part of August. She's in the hospital now, but is scheduled to be released to a Nursing Home on Friday.. She can't live alone anymore ...WAAAAAAHHH
I am not up to losing another parent ..
I'm tired, going to get lots of water to drink, a shower and then bed.
love to you all, Deena
JOYS
a wonderful husband
a cozy bed
being a stay at home wife
Posted by SweetAnnee at 7:44 PM